Formal Letter: Formal letters are generally used for official communications. They follow a standard protocol of language conventions and stipulations. Letters addressed to the heads of educational institutions, managers, company HRs, authority, employees etc., follow a formal tone in the letters. When we write personal letters to our families and friends, we do not follow any particular format, and hence they are addressed in an informal tone. Formal letters have to adhere to specific rules and regulations. Professionally suitable language with a formal tone should be used.

We have described the specific manner in which formal letters should be written in the following article. For instance, if we write a leave letter to the head of the institution, we have to highlight the reason for the absence in the letter. India accepts both English and Hindi languages in letters for all formal communications. Educational institutions impart letter writing activities as part of the curriculum. Students can also refer to books and online resources for mastering the technique of formal letter writing. Here, we present an excellent article on formal letter writing techniques, templates, formats and samples. Read on to know more.

How to Write a Formal Letter?

Writing techniques for a formal letter:

Some of the common letters writing topics are given below:

In this section, we present a few templates of a formal letter: 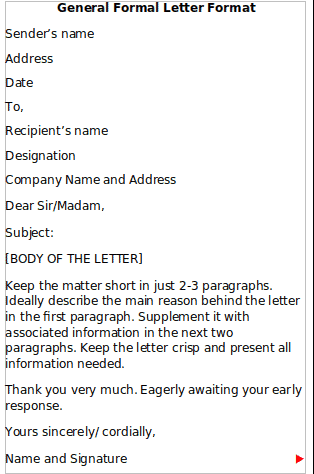 The CBSE curriculum follows a specific writing pattern for formal letters. All students studying in the CBSE board should adhere to the following rules and regulations explained below: 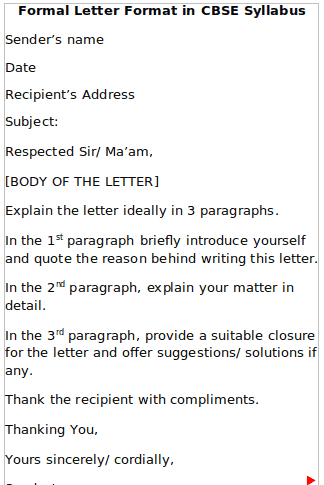 This section shall provide a formal letter writing template followed when employees want to write a resignation letter to their company superiors. A resignation letter if offered when an employee wishes to change/quit his job from his current company. 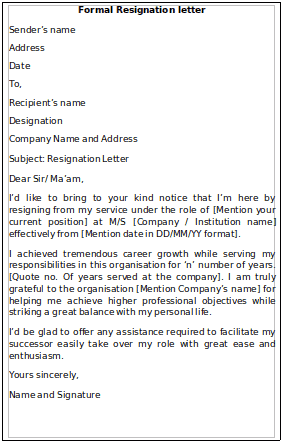 In this section, we have written a formal letter to a newspaper editor of a leading daily, drawing authorities’ attention to fix water woes at the earliest. 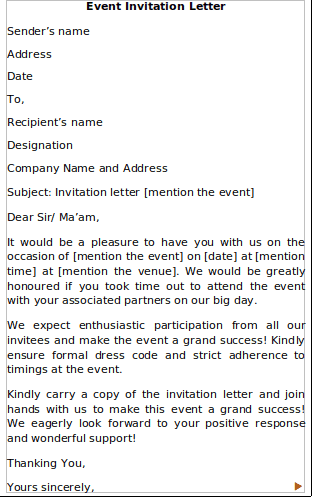 When there is an event lined up in front of us, before anything, the most important thing is the invite list and the corresponding invitation letter. With a beautiful letter addressed formally, we can expect a good turnout of guests. Here’s a formal sample of an invitation letter:

Difference Between Formal and Informal Letter

In this section, we list out a few significant comparisons drawn between formal and informal letters. Take a look!

1. What are formal letters?

2. What are the different types of formal letters?

Different types of formal letters are listed below:

3. What are the standard protocols considered while writing a formal letter?

A standard structure and format accompanied by correct alignment and formal addressing are the elementary protocols used in formal letters.

4. When is a formal letter written/used?

Whenever we have to make an official communication or correspond to someone professionally, we have to address the matter and the concerned person in a formal letter.

5. What is the language used for formal letters?

In India, both Hindi and English are accepted as official languages of communication for formal correspondences.